The site is secure.
The https:// ensures that you are connecting to the official website and that any information you provide is encrypted and transmitted securely.

Bor Yang (she/her) - Executive Director & Legal Counsel
Direct line: 802-828-2493
Bor Yang joined the VHRC in 2015 as an Administrative Law Examiner.  She investigated allegations of discrimination in state employment, public accommodations and housing prior to becoming Executive Director. She completed her B.A. from the University of Wisconsin - Madison and her J.D. from the University of Minnesota Law School in 2003. After a clerkship in District Court, Bor practiced in the areas of family law, government benefits and social security law, representing indigent clients and victims of domestic violence at a non-profit organization. Prior to joining the VHRC, Bor was a solo practitioner, qualified neutral mediator and college instructor in a legal studies program in Minnesota. Additionally, she was a volunteer attorney with the Minnesota Volunteer Lawyer's Network and provided instruction and training to legal and non-legal professionals on serving immigrant populations.  Bor provides training on implicit bias, fair housing laws, bullying, harassment and hazing and more.

Cassandra Burdyshaw (she/her) - Staff Attorney and Investigator
Direct Line: 802-828-2482
Cassie Burdyshaw joined the Vermont Human Rights Commission in 2018. She received her B.A. from the University of California, San Diego in 2005 and her J.D. from Vermont Law School in 2012. Cassie previously practiced in the areas of family law, government benefits and landlord/tenant law, representing indigent clients and victims of domestic violence at a legal aid organization. She worked as a policy director for the American Civil Liberties Union, where her work focused on reducing the school to prison pipeline and preventing a variety of discriminatory bills from becoming law. She was also policy director at an environmental non-profit, where her work included issues at the intersection of environmental resource extraction and human rights.

Amanda Lucía Garcés (she/her) - Director of Policy, Education and Outreach
Direct Line: 802-828-2580
Amanda Lucía Garcés joined the Vermont Human Rights Commission in December 2019. Prior to joining us, she was a consultant and speaker committed to education equity and human rights. Amanda moved to Vermont in 2017 and founded the Vermont Coalition for Ethnic and Social Equity in Schools, bringing together people from various racial and ethnic groups, disability rights and LGBTQIA+ advocates. The Coalition was a leader in drafting language and working with legislators and other stakeholders to pass Act 1, relating to the ethnic studies and social equity working group. Amanda comes to Vermont via New Jersey, Los Angeles, and Arizona where she worked in organizing around immigrant rights, border issues and against the proliferation of private prisons. A proud Colombian immigrant, Amanda believes in the power of narrative; while in Los Angeles, she co-founded the World Summit Award-winning Mobile Voices Project, an open source storytelling platform for day laborers and household workers to tell their own stories from their cell phones. Her most inspiring and thoughtful teachers have been the immigrant workers with whom she spent the past decades organizing.

Kevin "Coach" Christie, of Hartford, was appointed to the Vermont Human Rights Commission on March 1, 2018, to fill a term that expired on February 28, 2018.  Mr. Christie was appointed by Governor Scott to serve as Chair of the Vermont Human Rights Commission.   Mr. Christie attended parochial schools through high school, receiving a BA from Eastern CT State University in 1972. He moved to Quechee, VT in 1973 to open an automotive business. He is married to Mary C. Christie and they have two daughters, Amber and Angela. Mr. Christie started coaching track at Hartford High School in 1980 and then started coaching football and teaching at Hartford Technical Career Center in 1986, receiving his MEd in Ed. Admin/Supervision in 1990. He was named Vermont Technical Education Teacher of the Year in 1992. In 1994 he became the Technical Center Director/Principal at Randolph Technical Career Center in Randolph, VT in 2001. He began his Doctoral Degree in Ed. Admin. and is almost completed. Mr. Christie additionally was an automotive Service Director and then Theraputic Case Manager for youth in foster care for six years. He has served on the Vermont Human Rights Commission, Boys & Girls Club, Vocal Soloist, VT Special Olympics Ed. Advisor, Correctional Facility Chair, VT Reghab Advisory Council, VT Symphony Chorus, Nat. Rep. AVA Resolutions Comm., and Hartford Housing Authority. In addition Mr. Christie holds certificatiions in: Principal, K-12, Superintendent, Technical Center Director, Auto Tech Teacher, NOCTO, ASE. He is a notary public, has served on the Hartford School Board since 2007 and was the Chair.

Nathan Besio, of Colchester, a person with a disability who uses a wheelchair, was appointed effective May 16, 2007 to fill the slot on the Vermont Human Rights Commission formerly held by its chair, now Judge Thomas Zonay.  Mr. Besio, who resides in Colchester with his wife Gretchen, has been re-appointed three times, most recently in 2017 to a full term that expires in 2022.  He has over ten years of business and accounting experience, primarily in the non-profit industry.  He is a peer advocate at the Vermont Center for Independent Living (VCIL). Mr. Besio is very active in the disability rights community and is a member of several disability rights organizations.  Mr. Besio received a B.A. in Psychology from St. Michael’s College in 2000 and an M.B.A. from State University of New York at Albany in 2002.

Donald R. Vickers, of Georgia, was appointed to the Vermont Human Rights Commission on February 15, 2008 to a term of five years and has been re-appointed twice in 2011 and 2016 to  new five-year terms. His term expires in 2021.  Mr. Vickers recently retired from the Vermont Student Assistance Corporation (VSAC) where he played a major role in the development of the program for the past 42 years and served as VSAC’s president and CEO from 1988 until his retirement.  Prior to his employment with VSAC, Mr. Vickers served as Director of Financial Aid and Placement at Johnson State College.  Mr. Vickers is active in a number of regional and national higher education organizations. He served previously for 12 years as chair and member of the Essex Town School Board and is a presently a Justice of the Peace in the Town of Georgia.

Dawn M. Ellis, of Burlington, was appointed to the Vermont Human Rights Commission on May 15, 2015 to a five-year term that expires in 2020. Ms. Ellis is the President of Dawn M. Ellis & Associates, LLC and has worked for over twenty years to enhance communities by consulting in the areas of education and social services; community, economic and leadership development; access and inclusion; corrections and social justice; innovation and virtual learning; as well as creativity, culture and recreation. Her work empowers people and affects policy across the U.S. and abroad. As the former Executive Director of VSA Vermont, the state organization on arts and disability, Ms. Ellis built partnerships that continue today to increase access and include people with disabilities and from disadvantaged groups in the broader community.

Joan Berwick Nagy, of Cambridge, moved to Vermont from Ann Arbor, Michigan, in 1990. Joan's career path included a stint as an attorney, and many years in development as a grant seeker and grant maker. In Ann Arbor, she worked for Spaulding for Children, an adoption agency for older and disabled children and was the Executive Director of the Ann Arbor Area Foundation. She worked for many years in early literacy programs at The Vermont Center for the Book, ending her working years with six years as a Cambridge Town Lister. She has served on the Board of Copley Hospital, Vermont Water Resources Board, and is serving on the Board of Deacons of the 2nd Congregational UCC in Jeffersonville and the Board of Lamoille Home Health and Hospice. 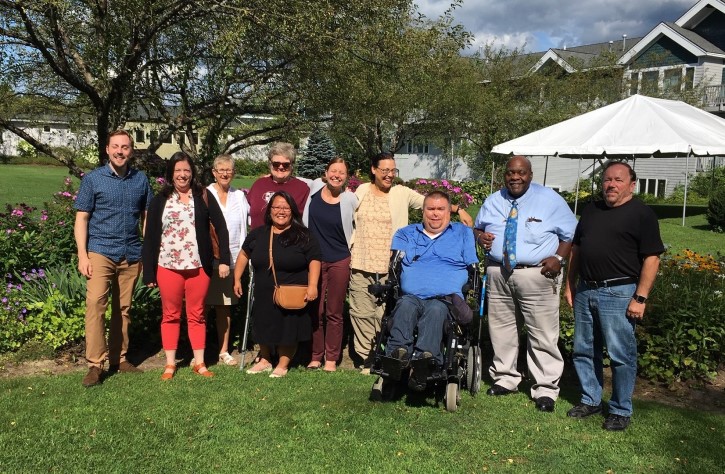 Staff and Commissioners enjoying a Strategic Retreat in August 2019.